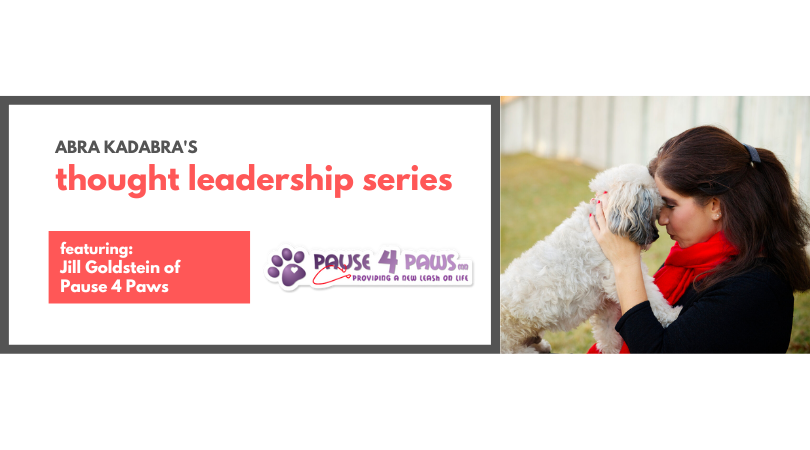 Jill Goldstein has been an animal lover for as long as she can remember.

As a child, if she saw a dog in a car alone on a warm day, she’d tell her parents to write a note to the owner and leave it on their windshield. Or she’d ask them to wait in the parking lot until the owner came out so she could be sure the dog was safe.

“My love for animals has always been a part of me,” said Goldstein, the owner and founder of Maple Grove-based Goldstein Mediation. “And as I’ve gotten older, my passion has grown even deeper.”

It was that passion that led Goldstein to start her own non-profit, Pause 4 Paws, 11 years ago. And although she had spent much of her life volunteering with various animal rescue organizations, she never dreamed she’d start one of her own. But sometimes life has other plans for us, which Goldstein learned on a winter night in 2011.

That evening, she was attending a fundraiser where one of the silent auction items was a private concert with Minneapolis musician Tim Mahoney. Goldstein’s friend knew that she was a big fan of Mahoney’s music so she bid on – and won – the private concert as a gift to her. And that got the wheels turning in Goldstein’s head.

“I thought instead of having Tim come to my house and do a concert, we could turn it into a fundraising event,” said Goldstein, who had recently adopted a dog and a cat from Red Lake Rosie’s Rescue. “My plan was to give half of the money to RLRR and the other half to another animal-related charity we hadn’t yet chosen.”

As luck would have it, her father had heard about an upcoming event that many of the local rescue organizations would be attending. Armed with a stack of business cards and plenty of enthusiasm, Goldstein went to the event, spoke with dozens of people about her fundraising idea and told them to reach out if they wanted their groups to be involved.

Before long, Goldstein’s phone was buzzing with calls from more than 20 organizations who were interested in participating in her event. In fact, the interest was so great that she ended up creating a questionnaire and conducting interviews to help her narrow down the field of applicants.

“Our thought was to pick groups that fulfilled what was important to us, like to make sure animals are spayed or neutered before they were adopted, no declawing of cats and other things like that,” Goldstein said. “We ended up selecting 13 groups to receive a portion of the money we raised at the event.”

But that wasn’t the end of the story. One of Goldstein’s friends heard about what she was doing and told her she should dream bigger and create a nonprofit. That way, people would be able to donate money and receive a tax writeoff – a huge plus when you’re trying to fundraise. Goldstein agreed and her friend helped her fill out the paperwork, telling her it generally took about six months to get everything approved.

Thirty-four days after submitting her application, she received her 501(c)(3) status. Paws 4 Paws was officially a nonprofit organization.

“I know it sounds hokey, but when that letter came through, I thought ‘OK, this might be bigger than I imagined,’” Goldstein recalled. “There’s something here that’s pretty special.”

Finally, the night of the fundraiser rolled around. Goldstein had hired an auctioneer to help run the proceedings and he told her if she had 100 people show up, it would be a win.

Paws 4 Paws, which is run by volunteers 100 percent, has grown and evolved since those early days. Up until 2019, they offered direct financial support to rescues and animal sanctuaries across Minnesota, distributing more than $500,000 and helping save the lives of more than 46,000 dogs and cats. In early 2020, the organization pivoted with the goal of being able to expand their reach and help even more animals.

“Though a lot of our money still goes to rescues, we have now started to put on spay and neuter and wellness clinics of our own,” Goldstein said. “We also help a small community in Puerto Vallarta – which is kind of my home away from home – with spay and neuters down there.”

Recently, Goldstein coordinated the transport of 49 dogs and 25 cats from Puerto Vallarta to Minnesota by bus. Pause 4 Paws, in conjunction with four partner rescue organizations, worked together to find fur-ever homes for these animals.

Pause 4 Paws has a number of fundraisers throughout the year, which can be found on their website and their Facebook page. Their annual gala, A Tail-Wagging Affair, is coming up Friday, November 11, 2022 at the Rush Creek Golf Club. The event will feature a silent and live auction and is being emceed by two local radio personalities.

“This year, we’re doing a state fair theme,” Goldstein said. “It’s going to be festive and fun and I’m really looking forward to this special evening.”

Interested in volunteering with Pause 4 Paws? The organization offers a variety of opportunities to help ranging from board membership to fostering to assisting at fundraising events. For more information, click here.

To donate on a one-time or recurring basis and receive updates about animals being helped by Pause 4 Paws, click here.