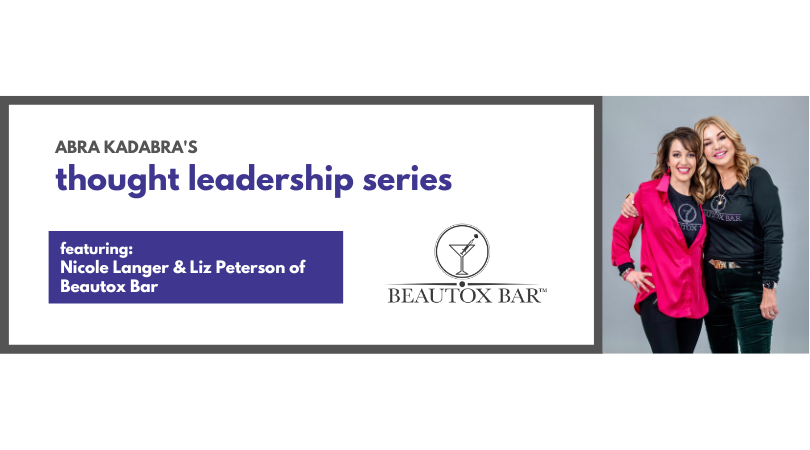 Nicole Langer will never forget the first time she got Botox – and it’s definitely not a fond memory.

“I had a horrible experience,” Langer recalled. “I went in already terrified of needles and there wasn’t even a consultation. The woman doing the procedure never gave me any information or prepared me for what she was going to do. I was in and out within five minutes and it cost me almost $800!”

Feeling frustrated, Langer reached out to her longtime friend Liz Peterson, a registered nurse, to tell her about the appointment. As she was recounting the story, Langer had an idea.

“I told Liz, ‘oh my gosh, you need to learn how to do Botox!’” said Langer, who has a background in business development and engineering. “I knew she would do a much better job than the woman who did my treatment.”

This conversation was one of many that the women had while out jogging together, and it touched on something they’d discussed in the past.

“During our runs, we would often talk about what we wanted to do next,” Peterson said. “I was getting really burned out working in the hospital and Nicole was having some of the same issues on her side. We knew we wanted to do something more.”

Then suddenly in that moment, the two friends realized that they’d found their “something more” and to say they hit the ground running would be an understatement.

“We literally went back to Liz’s house right after that run, signed her up for a class on Botox in Madison, Wisconsin and we drove down there together with me as her model,” Langer said. “And on the entire drive back to Minneapolis, we talked about how we were going to start our own company.”

Their idea was to open a medspa. A place where they could work together to help other people feel good while also feeling good about what they were doing from a personal and professional standpoint. A place where they would take excellent care of their patients and never make them feel like just another customer with a credit card.

On October 15, 2016, just over seven months after Langer’s nightmarish first Botox appointment, Maple-Grove based Beautox Bar opened its doors to the public.

“And we had no clients,” Peterson said with a laugh. “We were just sitting there twiddling our thumbs.”

What they did have, however, was motivation.

“I never, ever gave up. I was excited when we made $100 and I was telling Nicole ‘hey, we made $100!’ and she was like ‘yeah, we’re gonna need a lot more than that,’’’ said Peterson, noting that she and Langer started Beautox Bar with their own money and never took out a single loan. “There was just nothing in my brain that told me this wasn’t going to work. We were determined to make it happen.”

But it wasn’t always easy, especially when it came to navigating the ins and outs of operating a medspa.

“To this day in this industry, it’s locked down,” Langer said. “Nobody will tell you anything about licensing, insurance or the legal aspects of running a medical clinic – lawyers don’t even know half the time because the rules in the state of Minnesota aren’t crystal clear. We were out there in the deep end on our own and we had to learn how to swim.”

Gradually, though, things began to come together through a lot of hard work, dedication and even some sweat equity. Now, six years later, not only have Langer and Peterson been able to hire additional staff – including four more nurses – they’ve also expanded their menu of services. Patients can now visit Beautox Bar for everything from scar reduction to body contouring to vaginal rejuvenation and they can trust they’ll be in excellent hands.

“We’re here to make everybody look and feel their best, and that is the truth,” Peterson said. “Our clients are very important to us and it’s always about what they need, not how much we can sell them. To us, it’s all about education and giving them the information they need to make a good decision.”

No matter what your skin care and wellness goals are, the team at Beautox Bar is always available to help, but if you’re looking to practice some self care at home, here are a few of Peterson’s suggestions: