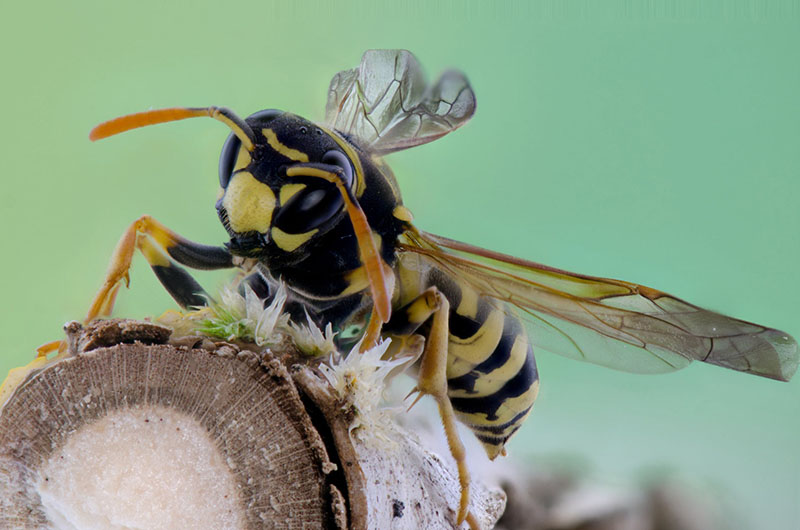 The time of year has arrived for a dramatic uptick in wasp and hornet removal calls. These stinging insects are a nuisance for many, and a deadly threat to others. Allergic reactions to stings from bees, wasps, yellowjackets and hornets can range from mild to life-threatening Anaphylaxis. Abra Kadabra understands the risk that stinging insect colonies pose to the community, and has developed a rapid response protocol to address it.

Abra Kadabra prioritizes stinging insect calls in our service routing. We consider it our responsibility to respond to active colony reports promptly.

One of our pest professionals will be dispatched to the property in question within one business day of receiving the call. We are a small but growing company, and we have structured our schedule to ensure our ability to meet this need.

Our pest technicians are passionate about their role in protecting their communities, and rotate on-call duties during evenings and weekends. An emergency response fee may apply for after-hours visits. 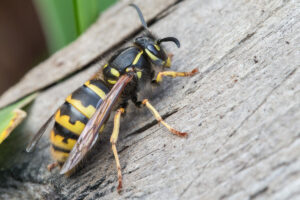 Emergency removal services include treatment of the existing colony and removal of the nest (if accessible) in one fell swoop. We also provide honey bee relocation services to clients within our service area.

*If hives require a ladder to access and remove additional fees may apply.

Protecting Our Community From Stinging Insects

It is our job to protect our community from stinging insects. We take pride in being able to provide this service and help our customers enjoy their yards again. We carry several types of products to address any situation rapidly and with environmental consciousness in mind.

Active colony locations are identifiable, whether or not the hive itself is visible, by the activity of its members. Colony access openings (in the ground, a vent, a wall, or other locations) will look as 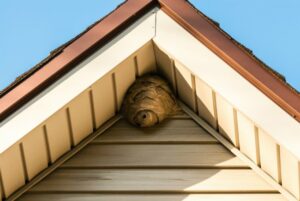 active as an airport by late summer, despite the colony itself not being visible.

At this point in the season colonies have grown to include lots of workers, with some acting as protectors of the colony and the queen. The larger the colony, the more protectors it has. Their activity will often indicate where they are coming and going from as they move about during peak sun time.

This activity usually peaks in August and September, making it the busiest time of the season for stinging insect calls and stings alike.

How To Recognize Your Local Stinging Insects

Commonly nest in wall, ground, tree or other voids, though some build nests that hang in the open from soffits, eves, or trees. Nests interior, if visible, appears to be stacked, rounded comb tiers with a protective sheath around it all. Bright yellow bodies with black lines, spots, triangles or diamonds on their abdomen and a body length of ⅜-⅝”. Nests used for only 1 year.

Commonly build nests that hang in the open from soffits, eves or trees, also in stacked tiers surrounded by an outer layer. Their bodies are roughly ⅞ inches in length, and bear whitish markings at either end. Nests used for only 1 year.

Honeybees are most commonly found in manufactured hives, but will also nest in voids with a vertically stacked hive composed of wax tiers. Golden brown with thin black stripes, about ½” long, and fuzzy.

These bees are ground nesting, with colonies found in empty ground holes, compost piles, and under objects on the ground. Nests will sometimes be created in tree or home voids, and are composed of wax cells. Typically black and yellow, very fuzzy, and ½-1 inch in length.

Stinging insects like wasps, hornets and bees are generally non-aggressive and will normally only attack if provoked or threatened.

Here are a few measures that can decrease the likelihood of a sting:

If you are attacked by a stinging swarm, run inside. If shelter is not available, seek shaded areas and avoid fields or bodies of water.

Stinging Insects By The Numbers

Abra Kadabra now offers stinging insect exclusion! This service identifies all entry points stinging insects could use to enter and nest within voids in your home, and seals those locations in an aesthetically pleasing manner while continuing to allow air movement.

These measures will also prevent Carpenter Ant home entry, and even killer wasps- should they ever become a local issue. For more information, visit our Insect Exclusion Page.